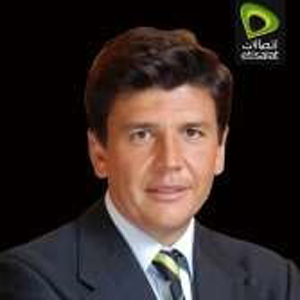 Salvador Anglada is the Group Chief Business Officer of Etisalat, one of the leading telecommunications companies in the world. He has over twenty five years of experience in the Telco and IT Industry, where he held different senior roles. He spent twelve years at Telefonica Group, where he was the Managing Director of ‘Telefonica Empresas’, the Enterprise Division at Telefonica Spain. Prior to that, he was CEO of Telefonica subsidiary in the Czech Republic ‘Telefonica O2’, and Executive Board Director of Telefonica Europe.

Salvador has been instrumental in the development of the Telecom industry in Europe. In 2002 he launched Telefonica Empresas in Spain as a Telecom & ICT dedicated unit for Enterprises and Government customers. In 2007 he led the merge between Eurotel and Czech Telecom, resulting in the first fixed / mobile integrated company in western Europe, and in 2009 he launched Telefonica O2 Slovakia as the third mobile operator in the country that only 5 years later became solid number 2.

Salvador has had a visionary approach on positioning Telcos as strategic players in the digital world. In 2012 he positioned Telefonica as a relevant player on the SMB ICT space with the acquisition of Acens Technology, the Spanish leader for hosting and cloud services for SMBs, and in 2016 he created Etisalat Digital to serve enterprise customers in the middle east in their digital transformation journey.

In addition to his executive career, Salvador has served on several advisory boards. Aside from serving as Executive Board Director of Telefonica Europe, he also holds board membership positions with several private companies including Cionet, ACENS and Telefonica Soluciones