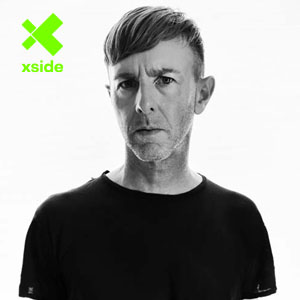 Richie Hawtin is a genuine original. His critical acclaim spans the creative realm of the fine art community to the technological vanguard. Meanwhile, as a performing artist, he is constantly pushing conceptual frontiers, moving things forward, welcoming as many as he can to ideas and experiences that would have seemed pure science fiction when he began his career.
Hawtin is British-born and Canadian-raised. He is the business mind behind Plus8 and MINUS Records, nurturing a plethora of talent from Speedy J in the early 90s to Gaiser in the 2010s. And, of course, he is Plastikman, perhaps that most of all, electronic musician par excellence, maintaining an underground agenda of avant-garde electronica over six albums (and two compilations). He returned spectacularly to the live circuit in 2010 with his Plastikman 1.5 incarnation which held its own among the new EDM generation of Skrillex, Deadmau5, etc, stars to whom Hawtin is both old guard ambassador and hero.
The Hawtin family moved from the Oxfordshire village of Middleton Cheney, UK, to Ontario, Canada, in 1979 when Richie was nine years old. His father, a robotics engineer, encouraged his son's interest in music and technology. To this day Hawtin remains at the forefront in this area. A beta-tester for sequencing software Ableton Live as far back as 2000, he has also worked closely with Native Instruments, notably on their Traktor Scratch programme. On 2008's Contakt Tour with fellow MINUS artists such as Magda and Troy Pierce, Hawtin jammed on Wireless Audio Workstations using brand new technology such as the Lemur Controller. His own Berlin-based development company Liine have created an array of innovations, from the Synk app, which allowed users to interact with Plastikman's live tour in 2010-11, to the Smudge app, which synchronized with audio-visual installations at his ENTER. Residency in Ibiza in 2012.
To mark Plus 8 Records reaching 25 years of age, Hawtin wrote and released an entire album of new material under the various recording aliases he’s used in that time. Titled "From My Mind To Yours", it was the first dancefloor material from him for some time. Alongside the new recordings and taking the ENTER.Concept worldwide, Hawtin started 2016 by announcing a partnership with product designer Andy Rigby-Jones, Allen & Heath and parent company Audiotonix to create Play Differently. The group will release products which will expand the creativity of today’s generation of electronic music artists. Richie Hawtin will, as ever, be revelling in the possibilities of whatever comes next....
Contact: [email protected]