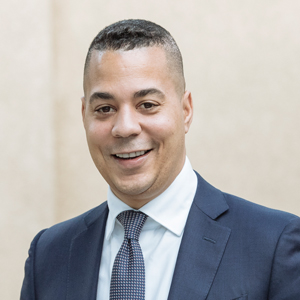 Michael is the only current Black executive committee member within BT Group. With that role Michael has taken on the great responsibility for pulling together the community for people of colour to improve networking across BT’s 100,000 employees. This has meant working to identify people of colour throughout the organisation, championing the improvement of the organisations data collection to help in tracking people of colour through their careers to support in their development and performance and to look at how we can underpin this with appropriate measures. This has also included individual mentorship of employees of colour to support and guide them through their career.

Prior to BT, Michael was a Partner and Managing Director with The Boston Consulting Group (BCG) in Dallas, Texas.  While at BCG, Michael has worked with many of the world’s leading technology and telecommunication c-suite executives on improving business and operational strategy. Michael is considered an expert in network telecommunications and enterprise software; he has published leading strategies on improving operational efficiency and effectiveness. Michael served as the lead Partner for BCG’s South System’s Technology, Media and Telecommunications Practice. In addition to Michael’s client service role, Michael also led BCG’s Ethnic Diversity and Inclusion Partner -responsible for the recruitment and retention of people of African and Latino/Latina heritage.

Prior to BCG, Michael was a successful entrepreneur.  In 1998, Michael started a supply chain software company in his apartment using his credit cards and limited savings.  Michael developed one of the first agent based distributed supply chain optimizers.  This innovation led to over $100M in venture capital being raised to further develop the solution.   Michael’s product was used by several large automotive original equipment manufacturers (OEM), 3rd party logistics providers and fast-moving goods retailers.

Throughout Michael’s career he has also served on several boards and non-profit councils.
• Michael is an active member of the Executive Leadership Council.  The Executive Leadership Council (ELC) is the leading executive membership organisation committed to supporting growth and development of Black c-suite executives and board members. For example, within the ELC, Michael has supported efforts to increase networking and mentorship with younger executives to help them grow and progress in their careers. In addition, via the ELC, Michael has helped increase the number of Black executives in several Fortune 1000 businesses through active engagement with the member companies across the ELC.
• Michael is an active member of Sigma Pi Phi (Boule). Sigma Pi Phi has approximately 5,000 members throughout the United States, United Kingdom, and The Bahamas. The members of Sigma Pi Phi represent the most accomplished pool of talent from African descent in the world - backgrounds include c-suite leaders of public companies, private firms, and global leaders in fields of business, technology, medicine, law, politics, investment banking, real estate, accounting, private equity, academia, and philanthropy.  As a member, Michael has coordinated efforts across local Boule chapters to help raise money for the Boule foundation and its associated scholarship funds. Michael has also coordinated efforts with the Boule Foundation and the UNCF (United Negro College Fund) to raise additional merit-based scholarships for children of African descent.
• Michael was an active board member for the Thurgood Marshall College Fund. TMCF focusses on helping students and historically Black colleges and universities to develop next generation African-American leaders. Michael’s role centred around helping develop strategies for TMCF to achieve their goals as well as leading specific programmes to support both the students and institutions. One example is that we developed the first programme with Apple which helped get students of colour into key engineering roles in Silicon Valley; the initial class was of 30 students.
• Michael was on the business advisory council for the district 11 Federal Reserve Bank prior to relocating to the UK, from 2013-2018.
• Michael was a board member for the United Way Metro Dallas from 2016-2019