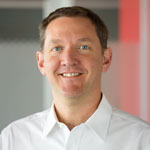 Jim Whitehurst is President and Chief Executive Officer of Red Hat, the world’s leading provider of open source enterprise IT software solutions and services. Whitehurst is an avid advocate for open software as a catalyst for business innovation. With a background in business development, finance, and global operations, Whitehurst has proven expertise in helping companies flourish—even in the most challenging economic and business environments.

In June 2015, Whitehurst published a book with Harvard Business Review Press entitled "The Open Organization: Igniting Passion and Performance" showing how open principles of management—based on transparency, participation, and community—can help organizations navigate and succeed in a fast-paced connected era. To date, the book has sold more than 42,000 copies; been featured in more than 130 press articles including articles from Fortune, Forbes, and Fast Company; and named one of the top 10 creative leadership books of 2015 in Forbes.

During his six-years at Delta Air Lines, Whitehurst drove significant international expansion and as Chief Operating Officer, oversaw all aspects of airline operations—from sales to strategy. At The Boston Consulting Group, where he began his career in 1989, he held several corporate development leadership roles, working in the Chicago, Hong Kong and Shanghai offices, and as a partner in the Atlanta office with numerous clients across a wide range of industries.