Kim is the CTO of Unmanned Life, the leading Autonomy-as-a-Service AI software platform powering the deployment of autonomous robotics solutions for enterprise. Unmanned Life positively disrupts  traditional industries such as logistics and smart manufacturing as well as pioneers new business solutions for the Cities of tomorrow. Powered by AI and 5G.

He has more than 13 years of professional experience in industrial engineering. Kim started his career as a project engineer in the automation department of DEME group which is a 150-year-old world leader in the highly specialized fields of dredging, marine engineering and environmental remediation with a strong presence in all the world’s seas and continents, operating in more than 90 countries.

Before joining Unmanned Life, Kim built state of the art fully autonomous drone ships such as Temarock, a multipurpose pontoon used to build Tuas harbour terminal in Singapore. This autonomous pontoon is capable of printing gravel on the seabed up till 35m with an accuracy of 5cm. The Pontoon won various awards and is called the "Swiss Army Knife" of the maritime industry and the technology is currently used as the foundation for the new generation of autonomous vessels. Kim has deep expertise in building and integrating enterprise class applications for Siemens, Rolls Royce, Palantir, Kongsberg and Rockwell and has directly managed teams of 300 people on mission critical protects all over the world for customers such as Chevron, Qatar government, Singapore government, LISCO and ADMA-OPCO.

Kim, as an expert in his field, has been invited as a guest lecturer for KU Leuven and SOGREAH, two top engineering institutions in Europe, an invited panel member and guest speaker at major conferences such as the CAA Innovation Conference, loT World Summit and World Summit AI to name a few. 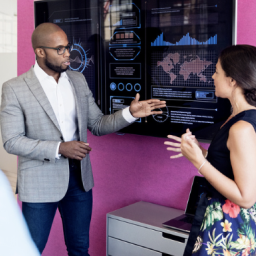 AI in Healthcare: Covid-19 & the Future